We got another request for money from the gun people this week.*

This time they sent us a gift, unsolicited and unearned, little stickers that say: “Society is safer when criminals don’t know who’s armed.” 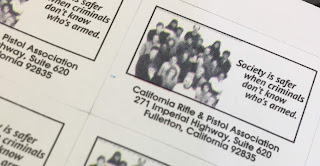 Is it? I think criminals already don’t know who’s armed. But that doesn’t make me feel any safer.

At the place where I work as an office drone, we have a program that helps families of the victims in the immediate aftermath of a homicide. 84% of the 79 Oakland homicides we recorded last year were by gunshot. We also have a program that helps young victims of violence – and most victims of violence are under 35 -- get their lives back together and deal with their trauma after an assault.** In 2017, we worked with 134 victims who survived an assault. 64% were gunshot victims.

Maybe with the claim on their sticker, the gun people mean to say society is safer if everybody is armed. Like how peaceful and orderly it was in the Old West.

Pretty much everybody had a gun out here in those days. Pretty much all men and many women carried a gun, sometimes keeping it concealed. According to historian Clare McKanna, in the Nineteenth Century, in Eastern cities, murderers rarely used guns for their deeds. But in California, 60% of murderers used guns. Mostly handguns. As sheriff and gunfighter Bat Masterson said, “Always remember that a 6-shooter is made to kill the other fellow with and for no other reason on earth.”

I’m certain that the gun people don’t understand the real nature of the violence that plagues our country, and especially the violence that has left so many young African American men dead or wounded over the past 50 years in Oakland. I suspect they don’t really care.

Is it possible that if each of the 80 gunshot victims we worked to support in 2017 had had a gun (surely some of them did, but they got shot anyway), there’d have been fewer gunshot victims in our caseload? Or would there have been more?

* I can’t help but feel they are trying to get me to pay for someone’s eventual violent death. Maybe they think they are trying to protect us. Even as in their letters they continue to call those who oppose them names and exaggerate the nature and degree of the opposition to their mania.

** Most shooting victims in Oakland end up at Highland Hospital, home of Alameda County’s excellent trauma center. Staff from our programs meet victims there, at their Highland Hospital bedsides, to begin the process of helping them deal with life through the cloud of trauma an assault creates. Our staff help them with the business of getting back to school or work or home. They also take the temperature of the room. The people we send in are from the same community as most victims. Many of them have been shot, or have, for a time, lived the life of the street. And if they sense a risk of retaliation, or that the victim remains at risk, they work to bring the temperature down, to discourage retaliation, diffuse tension and increase safety. Sometimes this required relocation. Sometimes it can be done through better communications with both sides of a conflict. 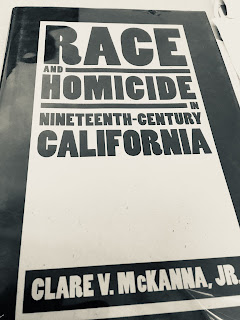