(New) Code of the West 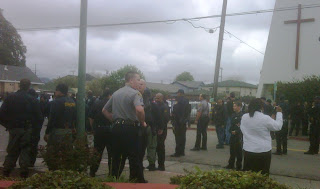 A few weeks later I saw his mother, young, pretty, a look in her eyes like someone lost in a tunnel, who can hear voices urging her on but can't tell where they come from, or if they’re friendly. I wanted to approach her, to ask her questions for my work, but I lacked the heart. I'll talk to her eventually.
Reportedly, Davante's young killer was facing him when she pulled the trigger, but there's a new Code of the West. The old Code only half survives, only the uncivilized part, the part that says any insult must be met with violence, and any perceived wrong must be avenged privately, with violence. The other tenets of the old code -- spare all women and children, never shoot an unarmed man, never shoot a man in the back -- are history. Shooters sneak up on you now. Not that they didn't in the old west, only there was a certain shame to it. Nowadays they fire into crowds from speeding cars, seemingly without discrimination, although often it turns out that the shooters knew what they were doing; usually they get who they wanted.
Often one or two bystanders as well. The killers show up at wakes and funerals seeking trophies: a cell-phone snapshot of their quarry in his casket, a lock of his hair. "You just know they're there," a friend whose been to hundreds of funerals told me. "You can just feel their presence."
Posted by Jim O'Brien at 4:30 PM No comments: