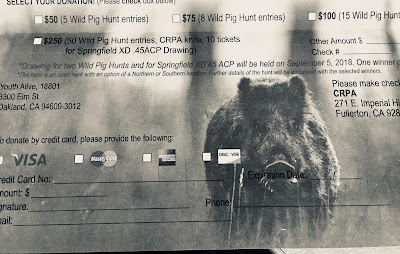 The Oakland violence prevention agency I work for got a fundraising letter from the gun people in the mail last week. Funny how these things happen, probably by accident, but they allow you to learn things about people and groups that otherwise have confounded you, not so much by their interests as by their proud paranoia and willful refusal to see their role in sustaining our death-haunted age. Sort of like climate-change deniers. Or somebody on I Didn’t Know I Was Pregnant.

The letter, from the California Rifle & Pistol Association (Be Safe, Shoot Straight, Fight Back), offers incentives in return for donations: $50 gets you 5 entries in a raffle for the opportunity to hunt and presumably kill wild pigs.

For $250, you get 50 entries in the pig hunt raffle, as well as 10 chances to win a Springfield XD 45 ACP Compact Pistol, described as an “excellent Concealed Carry handgun.”

For $250, Youth ALIVE!’s KWP can help the family of a homicide victim purchase funeral clothing. For $250, our Teens on Target program can train a teen from East Oakland to be a violence prevention educator. For $250, a Teens on Target youth leader can teach 2 violence prevention workshops in Oakland middle schools. For $250, we can help bring stability into the life of a young person who’s been shot (possibly by a Springfield XD 45 ACP Compact Pistol, which we understand is easy to conceal). For $250, we can keep our bilingual Homicide Response Line open for 2 months, to help devastated survivors of the killed in Oakland. Donate to Youth ALIVE! here.

The letter offered hope to gun people, and a warning. It said that the CRPA & the NRA had several "landmark" gun-protecting laws awaiting hearings before the courts or "making their way through the system," so the timing of the retirement of Supreme Court Justice Kennedy represented an great opportunity. Our upcoming new Supreme Court Justice, whom they were confident would always vote to interpret the Second Amendment like we were living in 1787, was sure to “open up avenues of lasting change in the protection and advancement of the Second Amendment” I thought the use of the word “advancement” there was telling. And unsettling.

The letter also said this: “The elitist anti-Second Amendment scoundrels are gearing up for the struggle of their lives.” Name-calling has never seemed more...in. 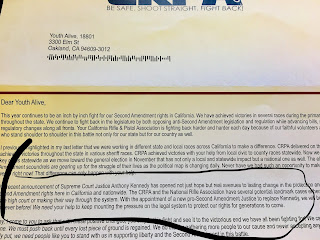 For the struggle for lives, for peace, for safety and sanity, for no more school shootings and so that all young people in Oakland and Parkland and anywhere else might have a chance to live, learn, earn and thrive in peace, I recommend checking out or even donating to Youth ALIVE!, or the Giffords Law Center to Prevent Gun Violence. 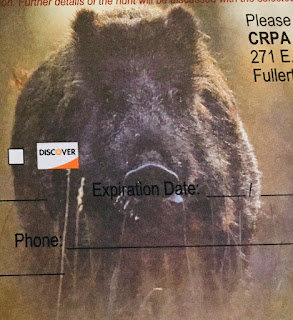