Read the full story of Oakland's Caheri Gutierrez in Until You Bleed, available for $0.99 from Amazon Kindle Singles.

It was late winter 2009, and while the face of Caheri Gutierrez was healing, her soul was roiling. Just a few months earlier, in November, at the Oakland intersection of 98th Avenue and San Leandro Street, she'd had half her beautiful face blown off in a drive-by. She was 18. The bullet burst through the passenger-side window out of nowhere. It ripped through her jaw and cheek and stopped in the right arm of her friend driving the car. Gutierrez felt a shock, she says, but didn’t know she’d been hit until she saw the driver’s expression -- he was looking at her -- and the gory mess all over the dashboard. That’s when she reached up to touch her face.

Loss
It was that face, its wide cheek bones, dark, expressive eyes and full lips, that she'd been counting on to be the foundation of a modeling career. Once a gifted student and athlete, in the past year Gutierrez had been been kicked out of two high schools. She'd fought with her family, smoked too much weed. More and more she'd come to rely on her beauty for attention, and for her future.

After nearly dying that night, after waking up to find her self jawless and toothless and deaf in one ear, and after a month in the hospital, Gutierrez had gone home to East Oakland, only to find her struggle for recovery haunted by fear of the street, by nightmares, by a growing anger and an incipient grief for her lost identity.

This is where victims of violence find themselves, in a lonely place where no one around them knows how to help. The victim feels helpless and so do the victim’s loved ones, coworkers, neighbors and friends. Many are afraid even to approach that dark place full of fear and confusion and anger where the victim exists.

Help
Tammy Cloud makes a career out of it. Cloud is an Intervention Specialist in the Caught in the Crossfire program, out of an Oakland non-profit called Youth Alive. She provides practical and emotional support to young victims of Oakland's troubles, usually starting right at their hospital bedsides. Many of Oakland's shootings and killings are retaliatory; part of the job of Cloud and her Caught in the Crossfire colleagues is to try and diffuse that urge, to calm angry family members, or sometimes gang members already armed.

She had been assigned Gutierrez’ case.

“I woke up in the hospital one day,” says Gutierrez, “and I was by myself, and I never liked to be by myself, and I see this woman, and I’m like, ‘Who is she?’ I couldn’t talk, but she introduced herself to me. It was Tammy Cloud, my angel, my guardian angel.”

Gutierrez recognized the name of the organization, Youth ALIVE!. They had been a big help to her brother when he'd been shot two years earlier. Now it was her turn.

Soon after Gutierrez had re-gained consciousness, Cloud asked her what her plans were once she got out of the hospital, and what kind of help she might need. There is business to take care of, life to get back to, even for the grievously wounded, especially for the wounded.

For her part, Gutierrez insisted she was going to be just fine, thanks, she didn’t think she’d be needing much help.

“I didn’t think that it would hit me, all the feelings that I had, all the emotions,” says Gutierrez.

“I knew it was gonna hit her hard,” says Cloud. “Because of where her injuries were, what she was doing prior to her injuries, the rep she had in the community. I could tell she was trying to make heads or tales of ‘what am I going to look like now?’ She’s still gorgeous, but I knew she was thinking, ‘I was this model and gorgeous, and everybody looked up to me for my looks, and now here I am, disfigured.’ So I knew that that was going to be very, very traumatic.”

A Plan & A Second Brain
All during the long days and weeks of Gutierrez’ recuperation Cloud kept coming around. She’d listen, chide, advise, help take care of business. She took Gutierrez out in her car, took her to medical appointments, to physical therapy.

“She was like a second brain,” says Gutierrez, and for a traumatized victim not always thinking clearly, an experienced second brain might be the most important service Cloud and Caught in the Crossfire provides. Depressed and exhausted, victims are bound to make mistakes, to make poor decisions, to neglect themselves and the business of life.

And Cloud had a plan. The first thing to do was to get a home school nurse to help with the recovery and to get Gutierrez on track to graduate. The other important thing: therapy. Of course, Gutierrez said she didn’t need therapy. She’s sheepish about that claim now.

“I thought I was going to be cool, I didn’t think I needed therapy.” She sounds almost amused by how naive she was. “I thought that Tammy was thinking that I was crazy or something. And I was, but I just didn’t know it.”

At home, Gutierrez finished her GED work even before her high school class had finished their school year. With Cloud’s help, she signed up for classes at Chabot College in Hayward. She started playing volleyball there. Her self-esteem began to climb. I’m ugly, I’m whatever, but I’m thee best volleyball player.

An Idea
In the meantime, Tammy Cloud was starting to formulate an idea, one that just might be a magnet toward a new normal better than the old normal. Cloud had noticed something about her client and, now, friend. “Something about the way she presented herself, her aura, her person,” she says.

Of course, Caheri's story was a profound one. And, as slowly she emerged from the physical trauma, it was only becoming more powerful. This young woman who, like so many others, had squandered her academic and athletic talents, and who had been shot and almost killed, was rediscovering her inner strengths. Cloud thought hearing the story, and meeting Caheri, might get the attention of young people, never easy to do. It might make them think, might help prevent the same things that happened to Gutierrez from happening to them.

She mentioned the idea of speaking, of talking to some Oakland students.

“I think I still had my imitation jaw. But at the same time, I knew that that was one of the reasons why I really wanted to talk to them, to show them: ‘Look, this is real, and this is intense and this can happen.’”

Cloud had reached inside the chaos of a traumatized soul to find its purest urge.

When a job opened up at Youth Alive, in their program called Teens on Target (TNT), Cloud suggested Gutierrez apply. TNT identifies East Oakland high school students with leadership skills and helps them develop presentations on violence -- domestic violence, dating violence, gangs and guns -- on how to deal with it, how to avoid a life of it, even if you are surrounded by it, even if it is all you’ve ever known. They learn to tell their own stories, to explain what life is like in East Oakland, the good and the bad. Then they take these presentations to middle school kids around the city. It’s a municipal conversation, unpleasant perhaps, but necessary.

A Job to Do
Gutierrez got the job with Youth Alive, but that brought new worries. She would have to tell her story. Despite lingering nightmares and fears, she would have to return to East Oakland, where she'd been shot. But that's where Oakland's problems are, so it's where YouthAlive! does much of its work. It was time to begin her new life, with the old mask gone and the new one uncertainly in place, time to confront her loss in a whole new way.

That sounds crazy when you are with Gutierrez, who is warm and upbeat and who, despite the visible scars that remain, is beautiful again.

Indeed, when you watch her work with the TNT students, it's clear that, far from being "scared away," they are drawn to her and her story. It is the kind of experience, the kind of story of pain and survival that in Oakland gives you authenticity, authority. There are places in Oakland where a scar, physical or emotional, speaks louder than a badge, louder than a college degree, louder than a pulpit.

Tammy Cloud understood this. Gutierrez does, too.

Most of the kids in the TNT program are African American. With them Gutierrez shares growing up in East

Oakland under a constant cloud of potential violence.

Recently she spoke to a group of Latino students.

“I saw some little gang bangers and a lot of pretty girls,” she says one day three years into her new life, “and I was really connected.”

Telling the story and talking to the students about their lives seems to pull Gutierrez up from her grief, at least temporarily. When she's working with them, the wounds on her face seem the farthest thing from her mind.

Read more about Caheri, violence prevention, and life in Oakland in Until You Bleed, at Amazon Kindle Singles. "Mesmerizing." -VisionHispana. "Gutierrez is an unforgettable subject." -San Francisco Chronicle 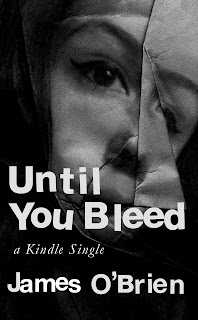