Trauma Cache, Part I: The Calendar and the Killing

The human urge to squeeze the trigger never checks the calendar. Perhaps grasping for hope when they’re down or out of morbid shock when they’re up, like now, we tend to pay too much attention to the daily and weekly violent crime numbers in Oakland. We assign them too much meaning.

Quan’s Objection
Certainly politicians and the newspapers do. Precisely one year ago, then-mayoral-candidate Jean Quan reacted defensively when I suggested to her that violence should be a priority of the next mayor.  “We’ve brought the murder rate down,” she said.

What does it mean?

Nevertheless, in daily news reports of homicides, reporters habitually insert the current year’s number of killings-so-far alongside the total from “this time last year.”  These numbers shouldn’t bring readers much hope, as in 2010, or, in the case of June 2011, when we have already suffered 51 homicides, deeper despair.

Portraits of the Barely Living
Notwithstanding that unhelpful habit, there is some really fine coverage here of Oakland’s violence and its impact; there is plenty of good writing and reporting and people should read it.  Scott Johnson’s Oakland Effect blog always delivers a good combination of hard reporting and even harder witnessing of the toll of violence on the living. Recently, the Bay Area News Group has had its reporters go beyond the daily litany of shooting, death, community silence, “Police request anyone with information call Crime Stoppers,” to put together a valuable series describing in part what happens after the violence, and what life is like for the survivors of the killed in Oakland. It amounts to a necessary, cumulative portrait of what the killing does beyond the sudden, brutal taking away from us of one person at a time forever.

What the Survivors Find
The killing keeps on killing. As I’ve written elsewhere, that bullet that kills, it also ricochets. The lasting impact of violence comes in the years of grief and pain and bitterness the living endure, in the trauma we cache away, that seeps out like bad medicine from some malevolent time-release capsule.  The lasting impact comes also with how those angry, despairing, lost walking wounded affect the community, or worse, the next generation.  If we ignore them, we ignore ourselves.

Not much the police can do about that, even if they had as many officers as they would like to have.

Addressing the impact of violence and loss on the living is an imprecise, necessarily intuitive, always difficult process.  There are no templates for healing a grieving our wounded person.  There are no definitive checklists of symptoms of their grief, no precise timelines or confident prognoses for their recovery.

For many, faith and family help.

But many survivors get no outside help at all.  Fortunately, some find great stockpiles of fortitude inside themselves; they discover strengths they’ve never needed before and likely never imagined they’d possessed.  In these strengths they find the resources to make their own comeback.

What I’ve witnessed in covering the aftermath of violence in Oakland is that those victims who go on to help and comfort subsequent victims usually seem the most healed themselves. .

Coming up: Trauma Cache, Part 2: A Moneyball Approach
to Public Safety
Posted by Jim O'Brien at 5:09 PM No comments:

Undefined Hatred in Oakland and Ireland


In early 19th Century Ireland rural farmers and farm workers, generally referred to as "peasants" in those days, would form secret societies, or parties, which sometimes would turn to violence for the purpose of resisting abuse by Protestant landlords.  Sometimes they fought each other, sometimes for no apparent reason.  In some ways, they were like the gangs and turf groups of Oakland and other urban places in America today.

Here, a character in a contemporary story by Irish novelist William Carleton describes the problems with the parties, with the vagueness of their mutual hatreds, the senseless violence they commit, and how they passed their hatred from generation to generation.

The writing is a little old-fashioned, but clear, and the joke of the title of the story, "The Party Fight and Funeral," is that whenever there's a party fight, inevitably follows a funeral.

I read it last night, and it reminded me of what many thoughtful people in Oakland have told me about the nature and depth of our own troubles:

I believe you would find...difficulty in ascertaining the cause of the feuds from the factions themselves. I really am convinced they know not, nor, if I rightly understand them, do they much care. Their object is to fight, and the turning of a straw will at any time furnish them with sufficient grounds for that.  I do not think, after all, that the enmity between them is purely personal: they do not hate each other individually; but having originally had one quarrel upon some trifling occasion, the beaten party could not bear the stigma of defeat without another trial of strength.  Then if they succeed, the onus of retrieving lost credit is thrown upon the party that was formerly victorious.  If they fail a second time, the double triumph of their conquerors excites them to a greater determination to throw off the additional disgrace; and this species of alternation perpetuates the evil.

These habits, however, familiarize our peasantry to acts of outrage and violence -- the bad passions are cultivated and nourished, until crime, which peaceable men look upon with fear and horror, lose their real magnitude and deformity in the eyes of Irishmen.  I believe this kind of undefined hatred between either parties or nations is the most dangerous and fatal spirit which could pervade any portion of society.  If you hate a man for an obvious and palpable injury, it is likely that when he cancels that injury by an act of subsequent kindness, accompanied by an exhibition of sincere sorrow, you will cease to look upon him as your enemy; but where the hatred is such that, while feeling it, you cannot, on a sober examination of your heart, account for it, there is little hope that you will ever be able to stifle the enmity which you entertain against him.
--William Carleton, The Party Fight and Funeral, 1852

The bi-lingual newspaper Visión Hispana has published a (very) short version of our Caheri Gutierrez story en español:
El Camino de Regresso
Posted by Jim O'Brien at 10:18 AM No comments:

Caheri in Her Own Words 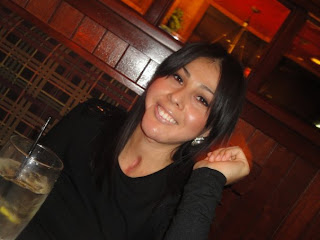 Read about the life and ongoing recovery of Caheri Gutierrez, the subject of "I Might Have Some Hope Here," at her blog, Life.
Posted by Jim O'Brien at 10:07 AM 1 comment: